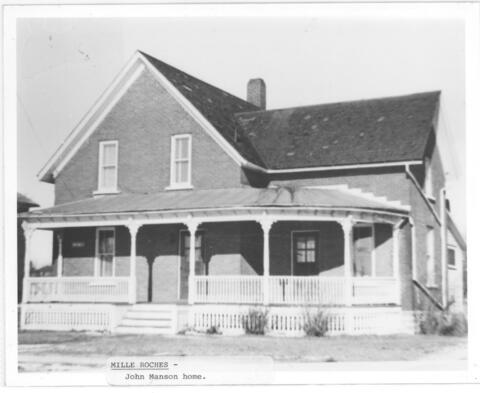 The John Manson home at Mille Roches. This Seaway house was the former John G. (1873-1954) & Caroline "Carrie" Frances (Osier) (1886-1971) Manson home from Mille Roches. Because this house was relocated through a non-Hydro moving company, we have little information on it. It was identified as SL 308, and it was moved to Lot 458, at 27 Mille Roches Road, Long Sault. This was a brick house in Mille Roches, but, before the relocation, the verandah and bricks were removed. It was moved as a frame building, then new siding and reconfigured verandah added at its new location.
Many will remember Lola June May (Waite) Manson- Corcoran-Baiks (1905-1994) residing in this home at Long Sault. She was John and Carrie Manson's daughter-in-law, having been married to George B. Manson (1907-1927).
For many years, this was the family home of Robert (Bob) and Kathleen (Quinn) Charlebois.