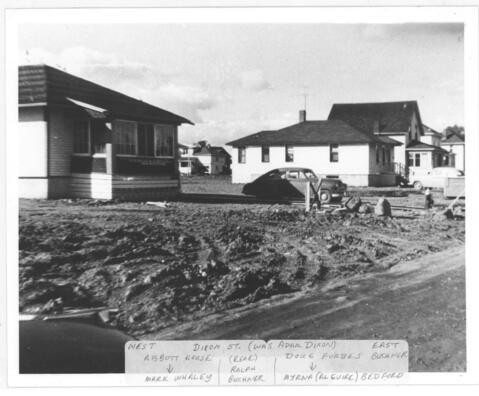 Photo taken c. 1957 showing north side of Adam Dixson Avenue
The house at left is the home of Mark Whaley and Patti Adams of 3 Adam Dixson Avenue, Long Sault. It was moved to Townsite #2 from the village of Mille Roches, the home of Mr. & Mrs. Austin W. Abbott. This was the 10th house moved into Long Sault and identified as SL 375. The family left the house on July 26, 1956, and the house was lifted from its foundation and moved to Lot 393 on July 31, 1956. The house was placed on its new foundation on August 1, 1956, and the Abbott family moved into their relocated home on that same day. While the relocation was taking place, the family stayed in Stop-over house #158, just two properties east of the Abbott home on Adam Dixson Avenue. Subsequent owners of this relocated home included Dwight & Mary (Brownell) Lafave and Eric Sturgeon.
The house behind the car is the Douglas Forbes home from Mille Roches. Ontario-Hydro purchased the house from Mr. Forbes, although he relocated with it. It was the 9th house moved in the relocations, and identified as SL 94. The Forbes family vacated the house on July 25, 1956, and the stayed at Stop-over house SL 350 at Mille Roches. The house was moved on July 26, 1956, and placed on its new foundation on Lot 393 on the same day of the move. The Forbes family returned to their home on August 1, 1956. In 2021, this home at 5 Adam Dixson Avenue is owned by Myrna (Bedford) Alguire
The next "Seaway" house at 7 Adam Dixson Avenue was owned by Alois and Gladys Buchner of Mille Roches and the 22 house moved to Long Sault, on Lot 391. This house was identified as SL 158, and, after its move Ontario-Hydro used it as one of their "Stop-over " houses, where families affected by the relocation could stay, free of charge while their homes were being moved. The house was lifted off its foundation at Mille Roches by Hartshorne House Movers on August 13, 1956 and placed on its new foundation the following day. On November 15, 1957, the house was rented to the Robin Cross family, until the completion of the construction of their new home and business, - the Long Sault Marina. For years, the Hawkshaw family lived in this home on Adam Dixson, then Ted and Dorothy Barlow resided here for many years. In 2020, Brock McBride purchased and upgraded the house for a rental