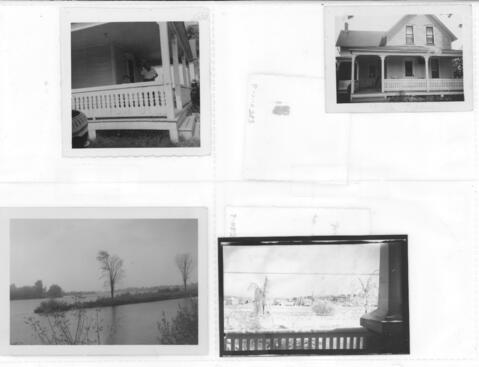 Mr. & Mrs. MacDonald at the home of Miss Alice Young

Top left - Mr. & Mrs. MacDonald at the home of Miss Alice Young, Mille Roches
Top right - This was the home of Miss Alice Young of Mille Roches and was the 23rd house moved to Long Sault. It was identified as SL 359 and had been purchased by Ontario Hydro prior to its move. Miss Young was building a new home in Long Sault, but did not move into it until October 1, 1956, so she rented from Hydro for a few months. The house was lifted off its original foundation and moved to Long Sault on August 14, 1956. The following day, the house was placed on its new foundation at Lot 354, 3 Frost Avenue. Miss Young left the house at Mille Roches on August 14, 1956 and stayed at Hydro stop-over house # 357 at 11 Frost Avenue. She returned to the house, at its new location on August 16, 1956, living there for only 45 days before moving to her new home.
Bottom left - View to the west of Mille Roches showing Bergin Lake and the remnants of tow-path from vicinity of Albert & Maude Alkerton's home, Mille Roches. - c. 1950
Bottom right - Winter view from the verandah of Hugh & Alice Warner's home at Mille Roches, with the Cornwall Canal and Old Mille Roches on Sheek Island in the background. - c. late-1940s